Hey there! First off, thank you so much for visiting our site and taking the time to check into Excalibur Paintball. This field has been in operation since 1987 after the owner, Mike Knight, played his first paintball game in 1986 with 15 of his friends. He was hooked!

Quickly realizing that he loved the game so much, Mike decided to take money he had been saving to buy a boat and build his very own paintball field on his property in Battle Creek Michigan.

Mike purchased 20 paintball guns plus supplies and with the help of his nephew, Johnny Morris, they together began building scattered bunkers,  trails and created a Base Camp Headquarters in his wooded field.

Then, the word was out!! Paintball at Mike's place on Sunday's!

When the Sunday play began it was all fun and games. Week after week the 20 guns Mike purchased were rented out and the next Spring season, wooded tournament began! People started constructing teams and meeting at the field for all day tournaments.

This series ran for 18 years.

The evolution of Excalibur Paintball has never stopped since 1987. From early day scattered bunker's and trenches, to bridge's, tower's, tunnel's and village's. Mike's most recent addition to Excalibur, a two story castle that topped the chart's for visiting players! 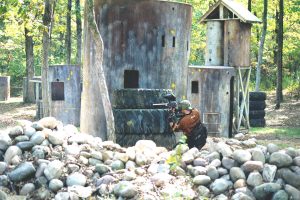